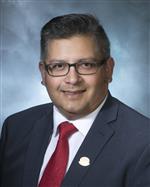 Mr. José Antonio Jiménez was elected to the Alisal Union School District in Nov. 2018, and he represents Area 5, which encompasses Alisal Community School and Bardin Elementary School. His term will expire in 2022.

Born and raised in Lima, Peru, Mr. Jiménez immigrated to the city of Salinas in 1987 with his parents and two younger siblings. Although he was 16 at the time, he had already finished his high school studies at Colegio Claretiano, a Catholic school in Peru. He studied two more years of high school and graduated from Salinas High School in 1989, later attending Hartnell College.  He went on to pursue a career in radio broadcasting in the local community bilingual radio station KHDC, later working locally for Wolfhouse Radio Group, Inc. In his career as a radio broadcaster, Mr. Jiménez became involved as a volunteer in local issues concerning the migrant community, particularly in education.

Mr. Jiménez has four children. Three of his children attend Dr. Oscar F. Loya Elementary school.  His oldest daughter is a former AUSD student and is a senior at Alisal High School. Mr. Jiménez is an active and dedicated parent in his children's education and schools.  For over 11 years he has held many leadership roles as a parent representative in both Alisal Union School District and in the Salinas Union High School District. He has served as parent representative, vice-president and president of the school site council for Dr. Oscar F. Loya Elementary School, president of the parent-teacher organization and president of DELAC and DAC.  He was also elected as parent representative in the school site council for La Paz Middle School and Alisal High School. As a public school parent and the son of an Alisal Union School Union retired teacher, Mr. Jiménez strongly believes in the importance of quality education in our community for all of our children. He is committed to quality education, safety and the well-being of children in our district.

Currently, he works as a hotel engineer for the Portola Hotel and Spa in the city of Monterey,  and dedicates his spare time to his children's education and extracurricular activities.