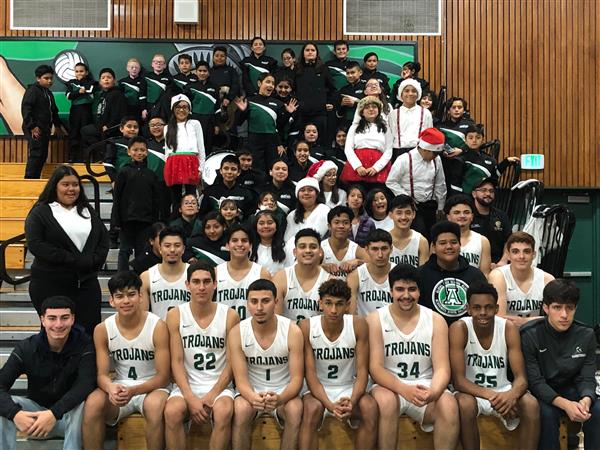 The All Star Drumline and Color Guard participated in the Miles-Solis invitational last week. It is the first time in the tournament's five year history that Alisal's award-winning artists are invited to perform, a perfect opportunity for them to learn about the history of their community and be inspired by talented basketball players and role models.

The Vantory Miles-Jose Solis Invitational is a three-day tournament organized by Alisal High Athletic Director Jose Gil in honor of two students of his who died within 18 months of each other in the early 2000s. According to a story published in The Californian, both were seniors in the 2001-02 season and helped the team capture the league title that winter season. Both died in separate car crashes, Solis in March 2002 and Miles in September 2003.

"We are extremely excited to have students from the AUSD perform at our 5th Annual Solis-Miles Invitational," Coach Gil said. "This tournament is in memory of two former Alisal Trojans who lost their lives in tragic accidents. Our mission is to keep their legacy alive by hosting this amazing tournament and involving youth in our community. The gym, known as the “House of Thrills,” was electrifying with the musicians present."

Alicia Fletcher, director of extended learning, said Alisal USD students look up to their older peers as role models. It's also an opportunity for them to visit the high school many of them will eventually attend, and become familiar with it.

"It's a legacy of Trojan basketball to represent the communitwith pride and giving back. The team is seen as heros by Alisal students for what they accomplished," she said.

We love watching our students demonstrate their talents throughout the community. And if they get to see their older peers in action, and become inspired by them along the way, the better.