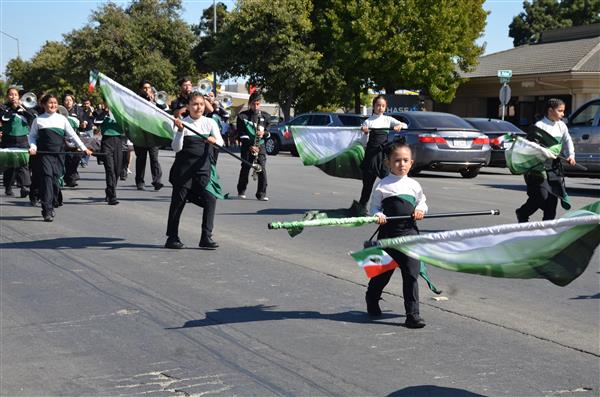 Students at Alisal Union School District began celebrating Mexican Independence Day on Saturday, Sept. 14, with the participation of the All Star Drumline and Color Guard at the annual Independence Day parade on East Alisal Street in Salinas. Braving the heat (which mercifully was not as high as the previous two days) students marched and walked for a couple of miles starting outside El Sausal Middle School on East Alisal all the way until Madeira, up to East Market, and back again. Their energy did now waver and they ended up winning second place! For more pictures of the event, click here.

Later in the day, Creekside Elementary held a Latin American Independence Day Assembly, organized by its multi-cultural committee. Dancers from Tonatiuh Danzantes del Quinto Sol -- who also teach foklorico dancing to our young students -- impressed Creekside kids with La Negra and a couple of "Calabaceado" dances from Baja California Norte. Creekside Principal Jose Juan Urquizo says there will be many other cultures represented throughout the year. For photos from Creekside's celebration, click here.