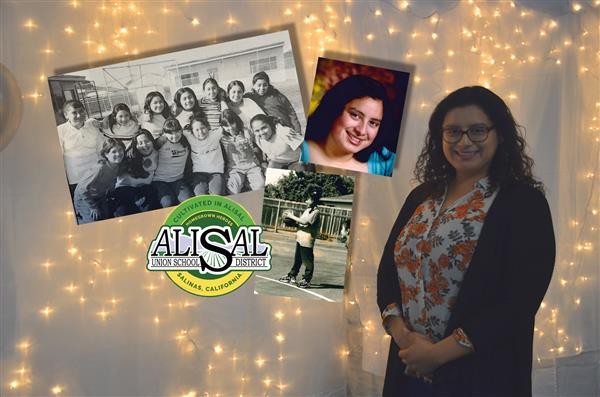 During her year studying abroad, Miriam López-Ramírez experienced what her parents must have felt when they came to the United States seeking a better life: doubts, culture shock, loneliness.

Miss. López-Ramírez, a Parent Education Specialist at Frank Paul Family Resource Center and graduate of Fremont Elementary, would call her parents when she first arrived in France and confide in them. Their answer? You’re going through the same things we did.

“Oh my gosh, is this the right decision? should we go back?” Lopez-Ramirez said, remembering what her parents told her. “Now I understand more the sacrifice they made. It was culture shock for me. I remember I got sick with the cold for three days because I wasn’t used to the weather, I got lost on the first day, my French was not up there. I thought ‘Oh my God, no puedo.’ That’s how my parents must have felt with English. I understand and appreciate a lot more their sacrifice now.”

Born in Salinas, Miss López-Ramírez arrived in the Alisal Union School District halfway through fourth year in elementary school. Her first teacher at Fremont was Mr. Eric Knutson, a big Star Wars fan who would give students nicknames and made them sit on a circle to reflect on what they’d learned.

“It made me connect more with what we were learning and connect as a class. Eso me ayudó mucho, specially since I was new,” she said.

Her fifth grade teacher was Mr. Daniel Boone, a good, strict teacher who emphasized writing. “I used to read a lot. My reading and writing improved a lot with Mr. Boon. I was the first one to reach 100 (Accelerated Reader) points because I was reading the Harry Potter series and they were helping me a lot with points.”

But her most memorable recollections are those of recess, and the concrete structure called “sandland” where students loved hanging out.

“It was my favorite place to go, most of us liked going there. It was magical, even if you were in 6th grade, you liked being there.”

After attending El Sausal Middle and Alisal High, Miss. López-Ramírez was accepted to UC Santa Barbara, where she received a bachelor’s degree in Global and International Studies with a minor in French.  As part of the program, she spent 2012-13 in Lyon, France.

While attending UCSB, Ms. López-Ramirez began working as an instructional assistant at a very wealthy school district. Although she liked being in a school setting, she realized the vast differences between her own upbringing and that of the wealthy students and decided she wanted to give back to her community. While still working in Santa Barbara, she applied for a job as a secretary at Frank Paul Resource Center and moved back to Salinas once she got it. A few months later, when a job as parent education specialist opened up, she decided to apply.

“I was already doing it without knowing I was doing it,” she said.

Miss. López-Ramírez says she feels grateful for the opportunity to be working back in the community where she grew up, a community full of love and struggle where she felt for the first time what’s like to be empowered.

“Even though it was just elementary school, that’s where it starts,” she said. “I had really good teachers … and for me, trying to be a support, a lending ear and guiding someone in the right direction and show others that they’re not alone en esta lucha, that’s really rewarding.”