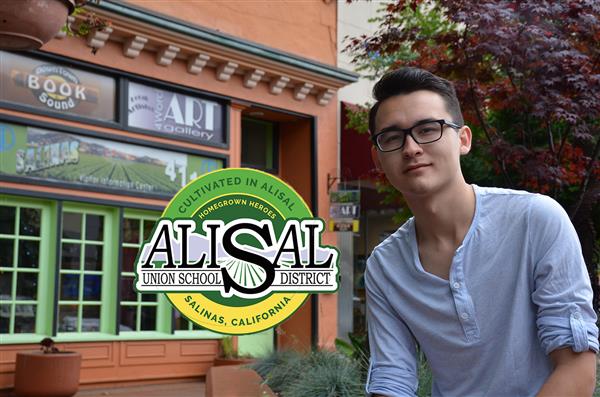 Jonathan Rome remembers solving a pictographic pun Mr. Blake Doherty had his students decipher as one of his most memorable experiences in his classroom. Mr. Doherty, now at Creekside Elementary, was Mr. Rome’s fifth grade teacher at Oscar Loya Elementary, and on the first day of classes, he placed on the board a letter B, the picture of a lake, the picture of a door, and a letter T.

“We had to figure out his first and last name,” said Mr. Rome, now a student of Columbia College Hollywood in Southern California. “As a kid growing up, I liked school. School is kind of awesome but it helped I had really awesome teachers.”

“We're still friends, we talk on Facebook,” Mr. Rome said. “In June 2017, Mr. Ritenour asked me to speak at the promotion ceremony for 6th graders, and I read one of my favorite poems growing up. Doing that speech was cool, going to Loya and being recognized felt awesome.”

Mr. Rome made very good friends at Loya, but after his sixth grade promotion, he went on to  Harden Middle School while most of his friends ended up at La Paz. Finding himself with no friends in one of the most challenging periods of human development -- puberty --  made things even harder.

“I didn't know anyone and I was also trying to figure myself out. But I had this (skill) as an actor, and that made me this energetic weird dude that only certain people would like and I would just stay in that role. Around 7th grade I started to realize I felt kind of lonely because of it. I didn’t feel I had a lot of people in my corner.”

One day he watched “The Breakfast Club,” the 1985 John Hughes classic film of five teenagers who discover what they have in common while on Saturday detention. That helped Mr. Rome feel less lonely, and inspired him to make his own films.

In the last four years, Mr. Rome has made several short films including “Early Bird” and “Brisé,” the bittersweet story of a young dancer which the budding filmmaker hoped would be his ticket to enter the California State Summer School of the Arts. Competition was tough and he did not get in, but “Early Bird” earned first place in the fifth annual teen film festival in Salinas, while “Brisé” inspired Rome to become more serious about live action drama.

“Right there I thought, I want to be more serious about this,” he said. “I went on to make short films every year, I loved it. I got into a lot of film festivals. I was in Carmel, the Watsonville Film Festival in 2017 and 2018, in the Asian American Film Festival in New York.  I was able to get into a lot of youth film programs.”

In 2018, his film “Stupidly Happy,” a teenage love story shot on the Salinas hills earned him the coveted spot at the California State Summer School of the Arts he had sought three years earlier.

After graduating from Everett Alvarez High in 2018, Mr. Rome was accepted at Columbia, where he’s now a sophomore. This summer he produced a six-part docu-series about a transgender rap artist, a friend he met while working at Chuck E. Cheese evenings and weekends.

Although Mr. Rome did not start falling in love with English as a subject until he was in high school, he feels a major influence from Mr. Gelki and Mr. Ritenour, since they are so art oriented.

“Doing art there was really cool, in the academics I was pushed a lot by my grandma. I’m glad she pushed me,” he said.

As a person of Korean and Caucasian backgrounds, Mr. Rome feels lucky to have grown up surrounded by the many cultures that thrive in the Alisal.

“It's amazing to grow up with Mexican people,” he said. “My mom’s adopted, my grandmother is Vietnamese and my grandfather African-American, both very Americanized. My grandma instilled a lot of Taiwanese traditions on me. Learning about culture is amazing. I know how to make pozole, I can speak a bit of Spanish, enough to communicate. In L.A. I’m able to speak Spanish and able to speak about culture. I owe that to (the fact) that I come from here.”