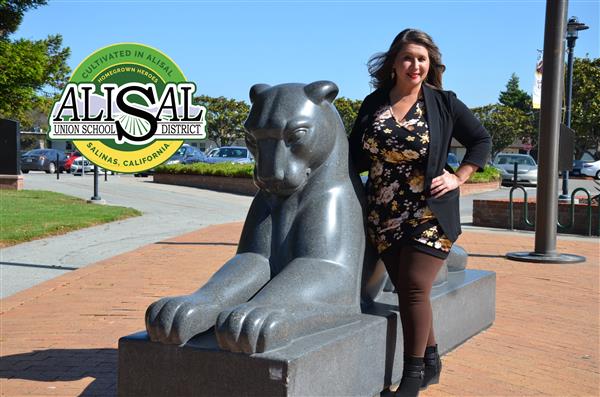 Irma López arrived in Salinas from San Luis Rio Colorado, Mexico, with her family when she was 6 years old. The family settled in Alisal and four of the seven children began attending Bardin Elementary.

“We were a minority and we had a lot of gringuito friends,” she said. “I had a great childhood. I remember at school being part of folklorico classes. There were no bilingual classes, but we had tutors to learn English. My kinder teacher was Ms. Smith, in first grade was Ms. Belcome, in second was Ms. Nelson, in third was Ms. Villegas, and in fourth was Mr. Forbes. Our principal, Mr. Dominici from Bardin used to call us ‘hamburgers.’ “You’re my little hamburgers,’ he would say.

“As a newcomer in 1971, going into school and not speaking English, it could have been very intimidating for me. I was very blessed that I had great elementary school teachers that always motivated me all the way through 6th grade.  There were seven of us kids, so they got to know the “López kids” well,” she said.

Ms. López spent fifth and sixth grades at Alisal Community School, where they had a hard time adjusting as the new kids in school, but later joined student council. Her brother was president and Ms. López secretary, she said.  Mrs. Kamm was her 5th grade teacher and Mr. Doer her 6th grade teacher, both of whom were always positive.

“As a child, I could tell they were passionate about the work they did to help the students be successful,” Ms. López said. “They cared about our learning. When we were learning to speak English, expectations were very high.

“Both of my parents took the time to go to school open houses, and attend parent/teacher conferences.  My mom and dad made it known to the teachers what their expectations were, and if there were any concerns they wanted to know about them.  A combination of wonderful teacher support that started at kinder and carried through 6th grade, plus my parents’ high expectation of all their kids, helped me build my confidence.  This was also the beginning of my networking, being that I was a bit of a social butterfly,” she said.

After graduating from Alisal High, Ms. López had the opportunity to demonstrate the strong work ethic she learned from her father, a migrant farmworker who turned to construction work. She took a job as a switchboard operator at Alisal High School, and at law office after school.

“Along the way, I always knew I wanted to work with kids,” she said.

The opportunity came along after she returned to Hartnell College to earn an associate’s degree on Behavioral Science and applied for a job as an outreach consultant for César E. Chávez Elementary.

“That’s when I decided I wanted to continue working with kids and parents as a resource” coordinator, she said. “That’s how I got to meet even more parents.”

Ms. López worked at César E. Chávez Elementary for one year then for Frank Paul for three years. While there, she met Nick Nelson of The First Tee of Monterey County, who offered her a position when she was laid off from Frank Paul.

At The First Tee, Ms. López was initially hired as participant resources assistant and later promoted member services coordinator. She worked for nearly eight years at First Tee, and during that time she discovered she wanted to help the community and began volunteering wherever and whenever she could: for the Food Bank, for seniors, for the homeless. Then one day, she was asked to run for office.

“Friends would tell me ‘You are good with people.’ And I would say ‘I’m too busy. I just want to give to the community.’”

As the newest member of the Hartnell board, Ms. López feels she’s in a great position to connect community members with resources.

“Any project I’m working on, I’m able to build good community relations, that has allowed me to help members of the community,” she said. “I’m all about serving my community right now. I’m a mentor for some of our kids through The First Tee. I’m passionate about encouraging youth in my community to pursue higher education.”

While Ms. López is firmly rooted in the present, she also looks back with fondness at her years growing up in Alisal.

“Growing up in East Salinas, I recall my neighborhood being like the ‘Wonder Years.’ It was a time when neighbors could be outside watering their lawn with no worries of drive-by shootings,” she said.  “As a child, not having that worry was huge, including the positive reinforcements from my parents and all the teachers I had in the Alisal Unified School District who helped shape the person I am today. My childhood experiences in all of my classrooms were very positive, and that is why I still remember the names of all my elementary school teachers.”