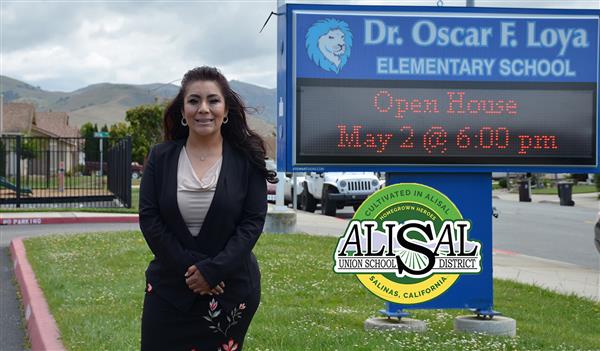 The years that Ms. Diana Garcia spent at Fremont Elementary in the Alisal Union School District were made very memorable by her teachers. Whether it was Kindergarten, where Miss Rain would wear different character outfits, or Mr. Thompson, who rewarded academic accomplishment with a trip to Chuck E. Cheese, the academic life of Ms. Garcia was filled with high expectations accompanied by exciting rewards.

But the highest expectation was set by her father Gildardo J. Garcia, an immigrant from Guanajuato, Mexico, a hard working man who demanded the same work ethic from his children and their teachers.

“He changed his work schedule because he wanted to be on top of my education,” Ms. Garcia said. “Even though I never physically worked, my grades had to show my dad that I deserved an allowance. If I got an A, I would get $25. At the end of the semester I was the richest kid on earth, or at least that is what I thought.”

During her first years in school at Fremont Elementary, Ms. Rain, a very nurturing and loving teacher, would dress up as different story book characters which would make learning fun. If she dressed as Goldilocks, Ms. Garcia remembers, all day activities would be based on the eponymous book.

“I had a very good Kinder teacher, and I have her in my heart. She was a beautiful lady, full of energy and full of love.”

Mrs. Aguilar, her first and second grade teacher, did not dress up with cute outfits. But she was a bilingual teacher who could communicate with her father and was a strong motivator.

“You can do this, we’re going to learn how to read in Spanish,” Ms. Garcia remembers the words of Mrs. Aguilar. “She was the type of teacher who was nurturing. If you didn’t understand something, she’d pull you to the back and would send you to Ms. Hawthorne to work with her.”

Her third grade teacher was all about writing in cursive and her fourth grade was not memorable because classes weren’t fun. “Most of the time we were bored in there,” she said. “But we did learn a lot about California History.”

Then came fifth grade, when Ms. Garcia learned how to write. “Ms. Davis was my fifth grade teacher. She was all about creative writing and having us use descriptive language and voice in our writing. She was the one who would always say ‘You have to capture your reader, you have to have a hook.’ We would write every single day.  She was just a superb teacher with high expectations for all her students. A special thing I remember from writing was that we were asked to keep a diary, a safe place to express our feelings.”

That’s how Ms. Davis found out the mother of Ms. Garcia’s best friend had died.

“No one had reported it to the school,” she said. “Ms. Davis read it the following night and the next day (my friend) was in the office, talking and crying. That’s when they announced her mother passed away. (Ms. Davis) helped my friend a lot, she would always put canned food in her backpack. There were times she saw us getting hungry and she would give us pop-tarts or breakfast burritos made by her.” She made learning fun, Ms. Garcia said.

Ms. Davis was all about writing, even for math, and when time came to learn U.S. states, she rewarded her students with bags of churritos.  “If you guys give me right answers, you’ll get something in return,” Ms. Davis would say. “She was a big, beautiful lady.”

From having a teacher who was all about writing, Ms. Garcia went on to a teacher who was all about math. Mr. Thompson had math books for grades third through eighth and would give students an assessment at the beginning of the school year to place them at the appropriate level. Every four to five weeks the students would get re-assessed, and if they went up in level, he would give them a big reward: a field trip to every child’s dream restaurant.

“We all wanted to go to Chuck E. Cheese,” Ms. Garcia said. “He would take a group of 10 or 12 students who made growth. He was strict but very good with class management. All I remember in his class was math and Chuck E. Cheese. I went to Chuck E. Cheese twice. I got stuck in 7th grade math.”

Ms. Garcia went on to use the same books in Mr. Thompson’s class at El Sausal Middle school.  In high school, her life changed dramatically. “I was always a good kid, and I wanted to play sports really hard, but my dad was very controlling, and he wanted me to stay focused on academics. He would say “sports are a distraction,” she said. “So I decided to be a rebel. Since my dad was so strict, I decided to just leave my house. I left my house with my now husband, and we became parents at a very young age.”

Ms. Garcia went on to graduate from high school with honors, and got accepted to UC Santa Cruz, CSUMB, and Santa Clara University. Her father convinced her to forgo her dream of attending Santa Clara so she could stay close to her daughter. With the university so close to home, Ms. Garcia was able to finish a five year program in four years -- her goal was to be out of school by the time her daughter started kindergarten. In July 2000, she started working as a bilingual teacher in a 4/5th combo classroom at Creekside Elementary for the Alisal Union School District.

Ms. Garcia was always encouraged by her father and other mentors to never become comfortable and continue moving forward, whether it was pursuing other educational opportunities or other positions. So after six years at Creekside she became a bilingual resource teacher.  She was enrolled in a masters degree program in school counseling and when she completed the program, she applied for a grant-funded job in 2009 for AUSD. After the grant ended, she returned briefly to the classroom, but the administrative credential she had earned along her counseling credential was paving the way for other positions. Early in 2012 she became program manager for Chavez and Loya Elementaries -- a position also known as assistant principal.

“I remained program manager for Chavez and Loya for that whole year and the following year. In April 2013 I became interim principal,” she said. District administrators and several Loya staff encouraged her to apply for the permanent position, and in July 2013 she became the school’s principal. She has been the principal of Loya ever since.

“It’s been the most rewarding thing I’ve been a part of,” Ms. Garcia said. “Just being here with the kids makes me feel alive. I have an open door policy, if they have something to share with me, I like to take the time to get to know the kids. When they brought the Whole Child Division/Initiative, well, we have been doing that.”

Ms. Garcia learned much from her dad when it comes to serving the whole child and community, but perhaps one of the most useful in her current position is dealing with difficult parents.

“I saw my dad get very angry at teachers for not challenging me.  He was limited in English, but he did not hesitate to send out his message, and now when parents come in here, I think of how patient some administrators were with my dad. He was a very difficult parent. As a little girl I saw it and I felt supported and I got it when it was my fault,” she said. “The key is to listen and compromise. There are things you compromise on and things that are unrealistic. I picked that up, so some parents leave a little unhappy but they felt heard. I try to understand them.”

Ms. Garcia can see herself in her students, and her father in theirs.  “I try to understand them. Sometimes our parents are in our school office or classrooms with their bufandas or pañoletas del trabajo, and they’re embarrassed. ‘Ay maestra, ando toda sucia.’ I tell them ‘no se preocupe.’ I remember my dad would get out of work and head out to Fremont school. He always reminded me to be humble, and tell me ‘You’re not better than anyone else just because you hold a university title.’ These words I carry with me at all times.”