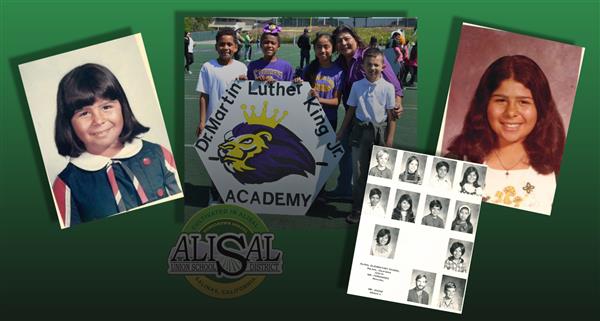 Back when Mrs. Suzanne Contreras was growing up in the Alisal area, there were a lot fewer people from many more different cultures than today. She was in the third grade when the family moved to Las Casitas, where her single mother had just bought a home and Mrs. Contreras began attending Sanborn Elementary (now Jesse G. Sánchez).

“Mrs. Dietrich was my teacher,” she said. “Then they moved me to Alisal Elementary for the 4th, 5th and 6th grade. My teacher was Mr. Wayne Boone. He was a brand new teacher, very creative and got involved with the families. He was very kind. He taught us a lot of art — reading through art, math through art. He was a wonderful teacher.”

“Las Casitas was a fun place to grow up in”, she said. It was a tight knit community, and when her mother was gone for work, Mrs. Contreras would go to the neighbor’s house, the Perez, Vegas, Hanson’s, Castillo’s. The Castillo’s home were her best friend lived, was like home.  Mrs.Castillo always asked, “¿Qué quieres comer?”

“The Castillo’s were like parents to us.  They wanted to adopt us, but my mom was like ‘No.’ My mother was a very strong woman. She was the first Hispanic woman to run for City Council here in Salinas — she came in second.”  She was very involved with the community.

Back then, in the Las Casitas area it was sparsely populated.  The gang problem was barely starting. On Rider Avenue there were all houses. The fields were plentiful and populated by cows and horses were VRB is now. Summer mornings, when her mother was gone to work, Mrs. Contreras would ride her bike to the neighbors and get together with her friends, go to the fields and play.  One of the neighbors had a horse ranch and he would let us ride the pony.

In the winter, down Las Casitas, the lake would flood all the way to Laurel extension were the soccer fields are. A young Mrs. Contreras and her friends would avail themselves to any floating device around — pallets, wood planks, trunks — and float down the lake.

“We would play Tom Sawyer or something. We had a good time. We would come home muddy and we would get in trouble. We didn’t have much money, so whatever clothes you had they had to last, we would get in so much trouble. It was alright we had fun.”

At Alisal Elementary School, Mr. Boone would make his students create their own stories, puppets and put on puppet shows.

“He would make a stage and we would have to be creative and make our own (plays). We would not just voice things, but write them. It all came together. Back then, girls had to wear dresses, so to play on the bars I had to make sure I had shorts on.” Loved twirling on those bars.

Mrs. Contreras attended El Sausal Jr. High and Alisal High School.  She began attending Hartnell College after graduation, but did not complete her AA. She worked and after 23 got married to her high school sweetheart and began a family of her own.  At 29 years old her husband encouraged her to go back to school. An aptitude test she took revealed she would be successful as a lawyer or a teacher. Her counselor said, “You can fight for clients or you can become an educator and help change a life.” He helped her fill out the application for San Jose State University. “I thought I wasn’t going to get accepted to San José State University”.  “None of my family ever went to college.” “They’re not going to accept me.” But she did. She was in her early 30s at the time, and she believed she was not going to be able to compete with all her peers, more than a decade younger. “I was in culture shock because of all the different languages and people I saw. They’re younger and they’re smarter. But I found out the experience I had was teaching them quite a bit too,” she said.

With a bachelor’s degree in social science under her belt, Mrs. Contreras applied to the teaching credential program and got accepted. In 1997 she was fulfilling her student-teaching requirement at Frank Paul when she was offered a full-time position at Creekside Elementary. First fourth grade teacher. “That was an eye-opener”, she said.

“They can teach you all they want in college, but you don’t learn anything until you have a classroom with 30 kids in it,” she said.

Mrs. Contreras moved to King City after three years of working at Creekside. She worked at Santa Lucia Elementary until 2008, when 43 teachers were laid off. She came back to Fremont Elementary as a Bilingual Resource Teacher in 2009, but there were layoffs too the next year. She decided to go back to school to work on a special education credential, and was later hired by the Santa Ana Opportunity School as a SDC Teacher grades 7th –age 22. Santa Ana and San Andreas are alternative schools in Hollister. While there, she acquired her masters in Specialized Education and her administrative credential. Five years later the SDC program in Hollister was closing and moving back to the sites. “I didn’t know what to do, so I applied for an assistant principal position.  I had many interviews, but Alisal was the first to offer me a job. She returned to the Alisal Union School District as an assistant principal for Dr. Martin Luther King Jr. Academy.

“I love being back,” she said. “I don’t care what anybody says, it’s a great place to be, there are wonderful people here, and I love working here, it feels like I’m home. I drive down the streets to do a home visit or something, and it’s like when I was little. The neighborhood looks different, there are a lot of apartments and clutter, but it’s home for me. The parents are so grateful for the little things.  Even if it’s just “good morning.” I believe in keeping an open door policy because so many kids are in need, just to talk, or sometimes they just need a bit of attention. It helps them and it helps me to see those smiles. It makes my day.”

Note: This is the seventeenth installment of "Cultivated in Alisal: Homegrown Heroes," a first attempt at documenting and celebrating the history of Alisal Union School District. For more information and other profiles,  click here. To submit your name to be profiled, or suggest somebody to be featured, click here.