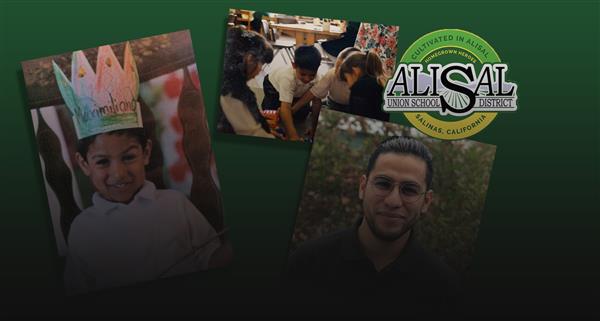 Before coming back to Salinas after living in Los Angeles for five years, Maximiliano Estrada had a little voice in the back of his head telling him the move was a setback. He believed he would hate being back home and would only be looking for ways to return to the path he set out for himself as soon as possible.

But he took a job as parent specialist at the Alisal Family Resource Center, and he fell in love with the mission and the potential of working with his own community.

Born and raised in Salinas, Estrada attended Fremont Elementary from kinder through sixth grade. What he remembers the most about his school years is how friendly the teachers were, in particular Mr. Cortez in second grade and Ms. Huerta, his fourth grade teacher.

“She was just really adamant about me becoming a better student, even though I was a jokester at times. But she understood there was potential in that, and that was one of the reasons I enjoyed her class.  Mrs. Robinson in the fifth and sixth grade was great with me, letting me do what I wanted in terms my creativity. It’s nice to have teachers who appreciate students for who they are and let them expand their talents,” he said

Mr. Estrada attended El Sausal, Alisal High School, and Hartnell College for two years, then transferred to University of California Los Angeles, where he majored in social sciences with an emphasis on history.

After graduating from UCLA, Mr. Estrada was working in the greater Los Angeles area as enrollment coordinator and academic success coach for an online high school, which served students in five different counties spanning Bakersfield to Orange County. The job entailed a lot of driving, and he began to look for a change of pace and perhaps to coming back home. He feels lucky to have found a job as parent education specialist in our district.

In his blogpost, Mr. Estrada said the East Salinas he knew was not the one he ended up working in because of all the advantages he had growing up.

“In 2018, we sometimes forget about the privilege we have. Privilege to speak multiple languages, to have two parents, to use a computer or a phone, to have a home, to have clothes, water, food on the table. Those are the privileges I was given being raised by the parents I had. Working as a parent education specialist, you don’t see these privileges. A lot of the times, you see hardships. You see parents sleeping in cars, multiple families living in a two-bedroom home, no food on the table, no computer, no place to truly call home. Our objective has always been to help alleviate these hardships. We don’t always have the answers parents are looking for, or the resources they may immediately need, but we always try to give their children a fighting chance at a decent education.”

Drawing inspiration from his work at the Alisal Family Resource Center, Mr. Estrada is now applying to study a masters in higher education counseling and students affairs. Before his experience, as an avid soccer player, he wanted to be an athletic director. But at the AFRC he realized that student success derives not just from their grades, but the well being of their families.

"I want to make sure students are taken care of regardless of whether they are student-athletes, B or C students, or even students on the verge of failing. It's possible to create positive change through whole student support. That can be the biggest difference between a successful student or a student left behind. This has to be looked at, especially in a community like Salinas, where there is a high number of people living below the poverty line. We need to make sure these families are taken care of."