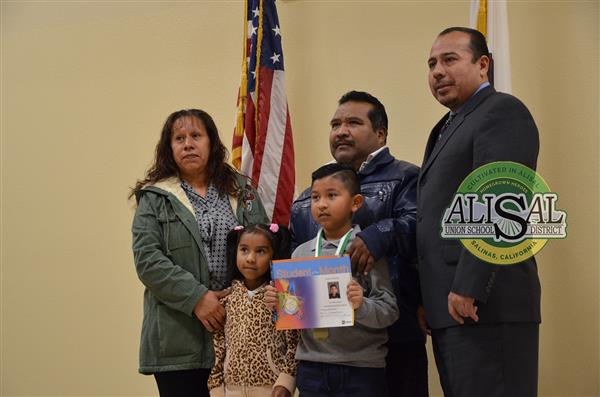 If you ever go to Jesse G. Sánchez Elementary, chances are you’ll find Principal Roberto Rodriguez-Flores getting a hug or a high-five from one of the nearly 800 students in his school.

“I see myself in some of the kids, and if I did it, these kids can do it. That’s my thinking: I came from the same background as they, they can make it as well. My job is to make sure I support them, that I provide them with any support they may need.”

Born in Zinapécuaro, Michoacán, México, Rodríguez arrived in Salinas when he was 7 years old. His father and grandfather had arrived via the Bracero Program for temporary workers to labor in the fields during World War II and the Korean War, so his entire family is comprised of agricultural workers.

“I see families feeling more comfortable asking me questions when they know my parents and I did the same type of work in agriculture — getting up early, going home late. I think that’s what makes my job a lot easier for me. When it comes to parents, I can relate to them, I can relate to the kids.”

Mr. Rodríguez began attending first grade at Fremont Elementary, where he continued until 5th grade. Then his parents purchased a house within the Alisal Community School boundaries, where he attended 6th grade.

“All my family and cousins attended the school,” he said. “My older brothers and sisters also attended Fremont. I had good experiences.”

“It was good to come back and see my elementary teachers as colleagues,” he said.

After promoting from Alisal Community, Mr. Rodríguez attended El Sausal and Alisal HIgh School. The process to apply to college was a mystery to him (as it continues to be for many immigrant families) but Mr. Rodriguez did apply to San José State University. Summer came and he had not received a response, so he took a job working in the fields, harvesting romaine lettuce. When his acceptance letter finally arrived, he didn’t think it twice.

“Me cayó del cielo,” he said. “I really didn’t have much plans after high school. But I didn’t think about it, I knew that kind of (agriculture) work was something I didn’t want to do. It was great news.”

Mr. Rodríguez showed the letter to his parents, who were supportive. He enrolled in the liberal studies program, and by his second year he was already making plans to become an educator.

“After my first year, my part time summer jobs always tended to be around children, either as a tutor or instructional aide. I always gravitated to these types of jobs. Why not make it a career?”

The summer after he participated in Mini Corps to tutor migrant children he declared his major.

Soon after he earned his degree and his credential, he came back to teach at Alisal Union School District. His first assignment was teaching at Sanborn Elementary for the 95-96 school year, when the school changed its name to Jesse G. Sánchez.

After teaching there for five years he became the school’s assistant principal, a job that entailed obtaining his administrator’s credential by studying evenings. Two years later, he became assistant principal for both Sánchez and Dr. Martin Luther King, Jr. Academy when it first opened. After five years as an Assistant Principal he got the opportunity to become the Principal at Jesse G. Sanchez.  Three years later he returned to the classroom and worked at Frank Paul Elementary for six years. In 2013 he returned to Sánchez as assistant principal and eventually became the principal. In total, he’s worked at the Alisal Union School District for 23 years.

Note: This is the fourteenth installment of "Cultivated in Alisal: Homegrown Heroes," a first attempt at documenting and celebrating the history of Alisal Union School District. For more information and other profiles,  click here. To submit your name to be profiled, or suggest somebody to be featured, click here.