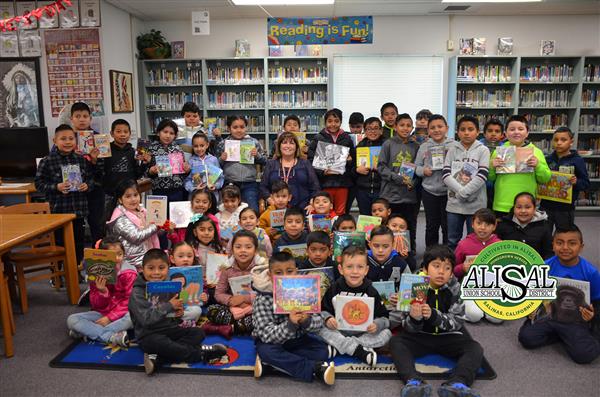 Bardin Elementary School librarian Patti Crawford remembers living a carefree, happy childhood growing up in the Alisal and attending Fremont Elementary from kinder through 6th grade. Her family was poor, she said, but she didn’t know it.

“We had friends and family, and everybody was on the same boat. We never thought ‘I can’t get new shoes this week.’ We just played outside and the whole neighborhood kids were always together. We went to Closter Park and played until 8:30 or 9 at night, fifteen of us together. It was country life.”

That was when there were hardly any buildings in the area, and the lot at the corner of Williams and Bardin roads across from the César Chávez Library was a field of purple wild flowers. The library itself was a skating rink. Laurel Drive at Sanborn road was nothing but a mound of dirt, where Mrs. Crawford and the neighborhood children used to play.

In Mrs. Crawford’s eyes, Fremont was a fun school: there was music, band, art and lots of singing. But the teachers were strict, a lot stricter than today, she said.

“If you did something wrong, the ruler would be slammed down on your desk and you’d be sent to the principal, and they had the right to spank you,” she said. “He would show the paddle with holes in it.”

But for the most part, Mrs. Crawford’s memories of Fremont are of happy times, such as jumping rope and going to the library. The entire school would pledge allegiance to the flag in an outside ceremony. The school did not provide meals back then, so students had to bring their sack with them.

“It was fun; you wanted to be at school,” she said.

After finishing sixth grade, Mrs. Crawford went on to attend El Sausal and Alisal High. She got married during her senior year and still enrolled in Hartnell College to learn Spanish, but dropped out when she had her first child.

Mrs. Crawford began working at Alisal Union School District 39 years ago, first at Fremont Elementary, where she lasted only three months. She transferred to Bardin soon after she started, and she’s been there ever since. She’s worked as a special ed teacher assistant, as test applicator, but she’s been the librarian for 21 years.  Her work at the school gave her the opportunity to raise a family, she said. Also, it gave her the opportunity to coach volleyball and participate fully in her children’s education.

“It’s been a pleasure to work at the Alisal. It’s given me a lot. If I had a full time job, if I had to be working outside a school (setting) it’d be working 365 days a year with only two weeks off. But I was home with my kids and my husband. The district really helped me be a good mom and a good wife. I was there for them when they needed me.”

And she loves the students, she says.

“Some of them can be pretty rude, but you wonder what happened to them, maybe they had a bad day. Just like you had a hard day.”

Mrs. Crawford and her husband used to give money to the library at Bardin but had to stop when her husband became disabled.

“If you can give back to your community, you feel you’ve completed something in life.”

Note: This is the thirteenth installment of "Cultivated in Alisal: Homegrown Heroes," a first attempt at documenting and celebrating the history of Alisal Union School District. To submit your name to be profiled, or suggest somebody to be featured, click here.