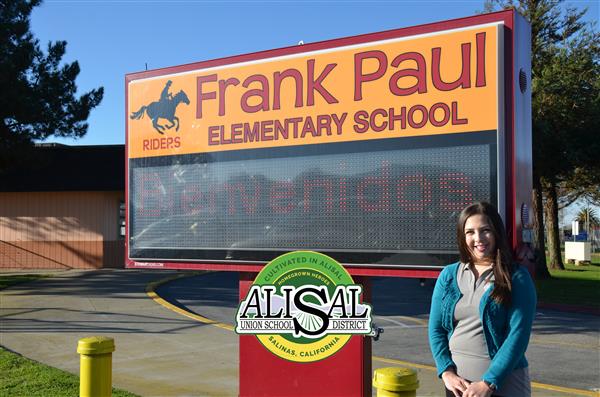 One day while shopping at Target, Sarai Ramirez heard someone call her “Sara-i, Sara-o, Sara-a.” It took her a second to recognize the man behind the voice, a person he probably will never forget.

“There’s only one person who calls me that, and that’s Mr. Porras,” she said, beaming the signature smile the friendly secretary is known for. Mr. Miguel Porras, principal at Frank Paul Elementary, was Ms. Ramirez teacher in first and second grade at César E. Chávez Elementary, and has since called her playfully with three versions of her name.

“Nobody knew how to pronounce my name,” she said.

Ms. Ramirez, secretary for the Whole Child Education department, attended kinder and first grade at Chávez, but her entire family was so fond of Mr. Porras they decided to follow him when he was transferred in the middle of the school year.

“He was such a good teacher, he was very inspiring,” she said. “We all moved to Frank Paul; I have very good memories of elementary in general. Mr. Porras ended up leaving, and I had no contact with him until I ran into him at the store. Even to this day he calls me that.”

In addition to Mr. Porras, Ms. Ramirez has fond memories of Mr. Samuels, her fifth grade teacher. Her parents were getting divorced, and the one thing that made the experience more bearable was belting out pop songs every morning with her classmates.

“He made it feel like home,” she said of Mr. Samuels. “Before we sang the National Anthem, he had us sing the loudest we could to the Beatles. That was his introduction every morning. And every time we would get a perfect score, he would burn a CD of the Beatles for us.”

After attending La Paz Middle School and graduating from Alisal High School, Ms. Ramirez enrolled at Cal State University Monterey Bay, where she earned a bachelor’s degree in Collaborative Health and Human Services. She began working at Alisal Union School District as a substitute paraeducator in 2015, and became the first secretary of the Whole Child Education department last year.

“I was just subbing around the district and I loved it. I was able to see all the departments. I went from being a paraeducator to being office staff, I even worked at  food services and I loved the experience,” she said.

Although she loves working at Alisal USD, Ms. Ramirez’s goal is to return to graduate school to earn a master’s degree in social work. That would be one way to give back to the community, she said.