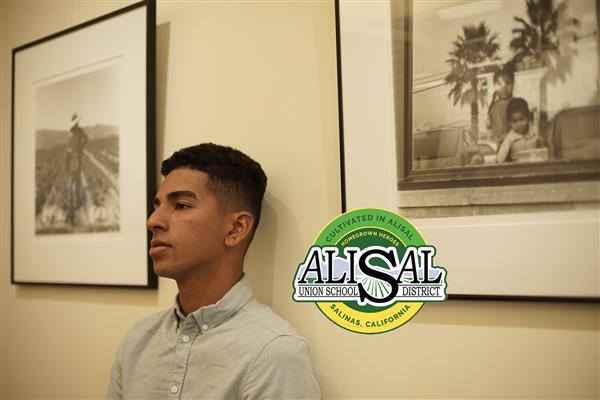 Carlos René Castro has only been out of high school for a couple of years, but the César E. Chávez Elementary graduate is already making waves.

Last August, Carlos’ photography was featured at the Salinas Center for Arts and Culture of Cal State Monterey Bay through the exhibit "Hidden Treasures of East Salinas." The show was on display through the summer and it garnered a lot of attention.

“The show got a pretty good reception, it had a pretty good opening,” he said.  “I heard a lot of good comments from the community. In the moment, when you’re building up to it, you don’t see that perspective.”

Born in El Progreso, Yoro, Honduras, Carlos arrived in Salinas when he was 5 years old, began attending Chávez in Kindergarten and continued through second grade. His family moved to Florida in search of better economic opportunities, but when they returned to Salinas a few years later, he came back to Chávez as well.

“It was really fun to be around my classmates,” Carlos said. “When I was in elementary school, I was a big trouble maker. I was trying to be the class clown, making jokes all the time. My teachers always had eyes on me. I’d like to tell them that I’m doing this now, that I’m going to school and I’m focused on my craft.”

He remembers his teachers as being strict and caring. Among them were Mr. Cisneros in the first grade, Jaqueline Mejia in the 5th grade and Mr. Smith and Mrs. Zavala in sixth grade.

“Mr. Juarez was a great professor. He was tough on me sometimes, and I  can see why now, it was for the best. He was also the soccer coach so I had a pretty close relationship with him.”

Soccer was not the only after-school program Carlos took advantage of. He tried to stay busy after school, he said, and met the coolest people ever.

“In elementary (school) you meet your closest friends after school. When you’re a little kid you say ‘I want to grow up, I want to have my career’ but for me now elementary school was so much fun, you could do whatever you want and just try to be a cool kid.”

Carlos took up photography during his junior year at Alisal High School, and took a photography class in Hartnell to learn how to use his first professional camera. He’s planning on attending an arts school in the fall to earn a bachelor of arts and wants to pursue a masters of fine arts later on.

One day, when he was visiting a gallery in Oldtown, he went to the Salinas Center for Arts and Culture, a place where he’d always wanted to show his photos. He approached the director and the rest is history.

“Hopefully once I get my BFA and MFA I will teach art or photography,” he said “Art is so broad, there’s so much stuff you can do with art. That’s my vision.”