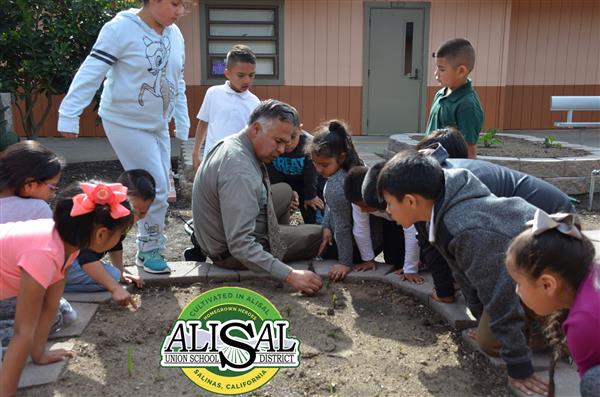 “If you have a tree that’s growing crooked, if you don’t straighten it prior to (fully developing) you’re not going to do it. Like you guide a tree, you have to guide a child,” he said.

Porras developed his love for plants in Acapulco, Guerrero, Mexico, where he spent the first nine years of his life after being born in Salinas.

When her returned, he began attending third grade at Fremont Elementary, a place where he struggled but also found one of the most important educators in his life. Under the guidance of Ms. Nancy Ruiz, Mr. Porras blossomed.

“It was difficult. I was a student who understood Spanish but was not able to read or write. I (had) lived in a beautiful place, green, by the ocean, tropical, and it was the total opposite when I came here -- I saw everything without color,” he said.

Mr. Porras returned to Salinas to be with his father. It meant that not only was he moving to a different country, he was also living with a completely new family, something that was very hard for him.

“But I found a very interesting, very loving teacher... I felt at home, liked, loved, wanted. She really liked me and I grabbed a hold of that. I learned how to read and write in Spanish, and transferred it into English.”

After graduating from El Sausal and Alisal High, Mr. Porras attended Hartnell College and later transferred to Cal State University Monterey Bay. He obtained his teaching credential in 1997 with the first graduating class of CSUMB. Later he earned an administrative credential and a master’s degree from San Jose State University.

Mr. Porras returned to Alisal USD 21 years ago to begin his career as educator at Cesar E. Chavez Elementary. In addition to teaching at Chavez, Mr. Porras has also taught at Bardin, Frank Paul, and was also a bilingual resource teacher for six years at Jesse G. Sanchez Elementary. Before being named principal, Mr. Porras served as assistant principal of Frank Paul for 6.5 years in two separate occasions.

His family in Acapulco had viveros, greenhouses, so Mr. Porras developed great knowledge and love for greenery. “I love planting, I love to see something mature, a seed that gives a tree so to speak.”

Mr. Porras has devoted much energy to the gardens in every one of the schools he’s been a part of. At Frank Paul, his beautiful planters include some cilantro that his late uncle brought to Salinas in the 1940s, a plant that had been grown in Guadalajara for decades. In the spring, the green area also blooms with roses, palo de san Jose, nopales, and many other plants he uses to foster in his students a love for biology.

Mr. Porras’ passion for plants matches his love for being around kids, he feels he fully understands them. That’s what’s helped him throughout his career, he said. After all, nurturing is essential for all living creatures.