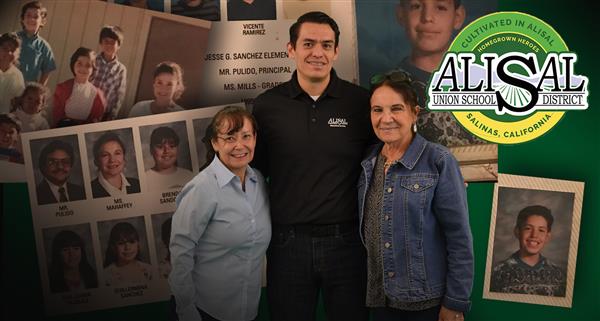 Martin Gutiérrez, Jr. can still see himself walking along the corridors of the old Jesse G. Sánchez Elementary. Back then, the school had rows and gardens in the courtyard, planters and cement -- nothing like Fremont and Alisal Community schools, two of the oldest in the Alisal Union School District.

“I remember most of my classrooms,” he said. The Professional Development Center “was our cafeteria. When I’m there, I can still visualize all the tables that used to drop from the walls. We had a balance beam, we had a lot of gymnastics in 5th grade. We had a trampoline and mats for floor activities.”

He remembers starting Kindergarten in Virginia Rocca Barton with Ms. King (now Mrs. Escobar and still at VRB), then moving to Sanchez when it was still called Sanborn Elementary. The name was changed in 1995, a few months after the community activist and former Alisal Union School District trustee died of cancer.

Many years later, when Mr. Gutiérrez was applying for his teaching credential, Mr. Myers became his mentor.

Mr. Gutiérrez graduated 7th in his class from Alisal High, and went on to UC Davis with the idea of earning a degree in math and engineering. He later decided to change majors and discovered he was short a few units to earn a minor in education. As part of the process, he needed to work with students, and even though he didn’t know which grade he preferred, he knew little kids were not for him.

He was placed at pre-calculus class, and as he worked with the students, he realized they were having a hard time decoding what the problems were saying.  They could not read -- even though they’d been in the U.S. school system all their lives.

“I went to my profesor and said ‘I really want to know what happens or is not happening at the elementary level. Why are these kids leaving without reading?”

Although the idea of working with young students was not appealing, Mr. Gutiérrez ended up being placed in a first grade classroom. In that classroom he fell in love with the teacher, her classroom management skills and the children themselves. When the opportunity presented itself for Mr. Gutierrez to move to another classroom, he decided to stay.

“I felt that this teacher would give me the key to solve a lot of problems. I wanted to know what it is that she had.”

Mr. Gutiérrez began his teaching career at Pajaro Valley Unified School District, where he worked for seven years. He arrived at the Alisal Union School District five years ago to serve as assistant principal for Alisal Community School. He became principal at Bardin Elementary for the 2018-19 school year. At our district he’s had the opportunity to collaborate with his former teachers, something that he finds inspiring and rewarding.

Throughout his educational career, Mr. Gutiérrez has remained intent on decoding the mystery of great teaching he saw from Señora Mitchell in Davis, where he fell in love with the profession.

“Reflecting on how she did it, it was more that she cared for the students. It was not the worksheet, it was the way she addressed the students, the way she interacted with them was very warm and loving… It was more how she made those kids feel comfortable and welcomed… If you make kids feel loved and welcomed they’ll rise up to any expectation. Instruction wise I have not identified the ‘magic pill’, but I’m sure it’s love.”