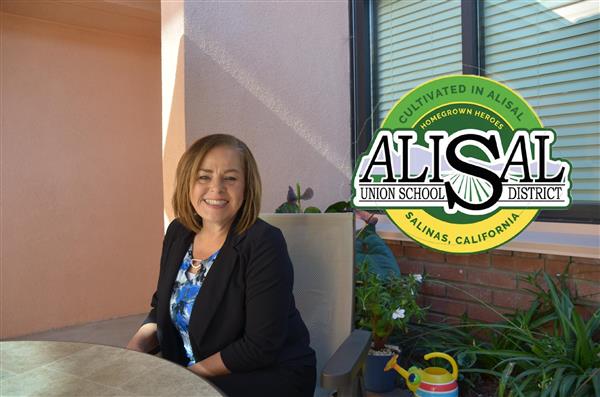 The story of Tina Wallace at Alisal Union School District started even before she was born. Her mother, Nita Wallace met her father Gary Wallace when they both attended Jesse G. Sanchez Elementary (still named Sanborn school at the time). Nita had a crush on him and married Gary on July 9, 1965.

“My dad used to say ‘she bothered me all the time’,” Ms. Wallace recalls fondly.

But Tina Wallace’s own story began at  Bardin Elementary, which she attended from Kinder through sixth grade.

“My teachers had such a big impact on me,” she said. “They were very caring. We used to have sports day, sing-a-longs, and we went to science camp in 6th grade.”

Ms. Wallace also remembers Bardin used to be a lot smaller and have a different configuration. Where the district now houses the portable buildings for the technology department there used to be a grassy play area for students with a chain link fence surrounding fields. From the school she would see a small farmworker housing camp.

“When we were in upper grades, the field workers would throw heads of lettuce or boxes of lettuce to us,” she said. “Most of the kids would take the lettuce home.

Like many graduates of our district, she then went on to El Sausal Junior High School, as it was called back then, and later Alisal High.

Right after high school, Ms. Wallace attended Hartnell College with the intention of becoming a nurse, but after graduating from the LVN Program and  working at the county jail as a LVN; she decided the medical field wasn't her passion.

In January of 1996, Ms. Wallace began working in the Alisal District when her youngest child started Kindergarten at Cesar Chavez School.

She started out as a substitute Campus Supervisor, eventually was hired as permanent. She also worked in the after school program and then went to work in September of 1999 the Food Service Department.

“I’ve been with the district for 20 years,” she said, adding that she’s been a supervisor for nine of those.

As a cafeteria worker, she realized the impact she could have on children. There was a child who didn't like syrup on her pancakes.

“I would always put the syrup in a different slot. That really meant a lot to her,” she said. “Even if it was just the syrup, even if it’s a little thing like that, it means a lot to a child.”

“Life hasn't  always been easy, we all have our personal struggles,” she said. “But to be able to come back and serve the  students and community of Alisal, and to be able to know that our smiles, our kind words, or something we do for (our students) can help change someone’s life or make their day a little brighter… that’s what being cultivated in Alisal is all about.”