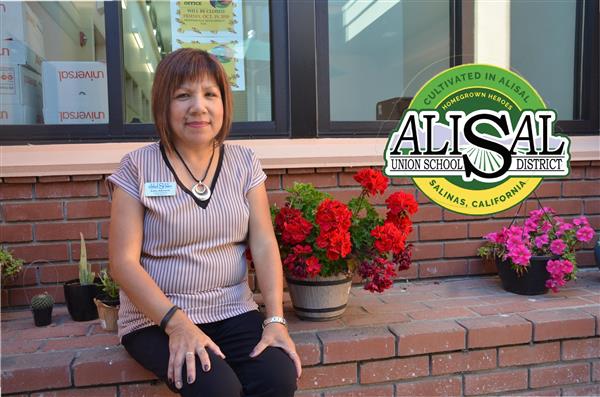 Born and raised in Salinas, Kathleen Ballesteros first and only year at Alisal Union School District schools was her sixth grade, when Jesse G. Sánchez Elementary was still called Sanborn.  Her memory of 6th grade was her teacher Verdan Glenn, who welcomed the homeroom class each morning with a smile. It was her most important year, she said, as it was a year of transition into the middle grades.

“That one year made a difference in my life,” she said. “That area was starting to get rough, you started seeing a lot of people partying and the gangs and the drugs, but it did not bother me. I was able to relate to people.”

After graduating from Alisal High, Class of 1977, she enrolled in Hartnell College not knowing really what she wanted to study. But she signed up for business courses such as typing and data entry. Then she became pregnant with her first child and she had to take a break from student life.

“I ended up getting a job at the social security office, IRS data entry facility on Alvin Drive.  Back then, Salinas was the data operation center for Social Security for California and other states. I worked there for 5 years and moved to San Jose attending Job Corps,”

Ms. Ballesteros got married in 1984 and three years later became a parent of twin girls.  Following life’s ups and downs, she was faced with being a single parent again so she decided to return to school, attending Central Coast College where she enrolled in an accounting course.

“That’s when I realized that was my strength,” she said. “I came to Alisal (as a) Manpower temp. And I’m going to be honest with you, when I came to Alisal, I did not understand school accounting. It is different from private industry accounting. Once the District opened the position, I applied for the job.  The director who offered me the position told me, ‘I have faith in you that you can do the job’.”

That was 27 years ago. As Ms. Ballesteros looks back on her journey, she realizes it’s tenacity what’s brought her so far.

“I didn’t like math, but I stuck it out, I learned math not knowing that was going to be my major, my ultimate job and I really love accounting.”

Having grown up in a traditional household where women were expected to get married and have their husband support her, Ms. Ballesteros said she struggled as a single parent but yet, she’s the stronger for it.

“Even though my marriage did not work out I had three daughters that depended on me. I went back to school and I was able to obtain a position at Alisal. The hardships of life make you stronger for the future,” she said. In addition to her full time job, Ms. Ballesteros enjoys giving back to the community by volunteering with her union, the California Schools Employees Association, and by serving as an appointed commissioner in Monterey County. She also helps serving meals to the homeless whenever she has a chance.

“When you’re fortunate, you want to” give back, she said.  “Many of us are fortunate and blessed to (be able to give back) to others, whether its resources, a listening ear or communicating encouraging words that helps someone in their time of need.”