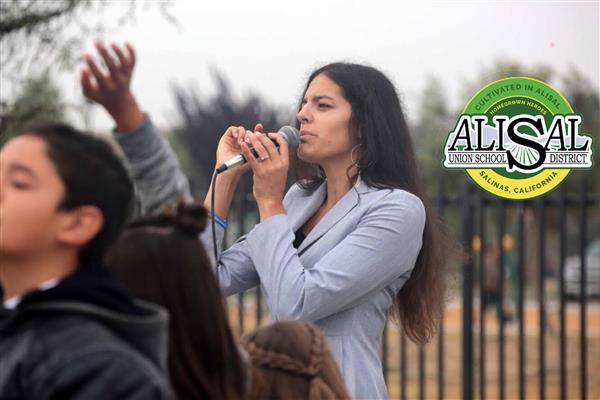 On her first day of classes for sixth grade, Janet Gutierrez stood in line before entering Mr. Martin Cisneros class. It was her second and last year at Cesar Chavez Elementary. She remembers him standing outside the classroom door in his suit. She felt that her new teacher was setting a tone of respect and high expectations, as if he was saying “I’m your teacher and you’re going to come here to work.”

“It worked,” Ms. Gutierrez said.  “We instantly had this respect for him. Throughout the course of the year he’d said ‘You guys are going to middle school and 10 years from now, where do you see yourself? What do you see yourself doing?”

And in one of those classes, Ms. Gutierrez distinctly remembers writing “I want to be a principal.”

“A lot of teachers I work with now worked at Fremont. So when I came (to Monte Bella) I saw all these familiar faces. It was really nice to have that connection already.”

Ms. Gutierrez became a permanent employee of the Alisal Union School District as a dual immersion teacher at Frank Paul. In 2012 she was transferred to Monte Bella Elementary as a second grade bilingual teacher. After earning her administrator credential, she became assistant principal at Loma Vista in the Salinas City Elementary School District. A year later, she returned for the 2015-16 to Monte Bella as assistant principal, where she’s been ever since.

When she reflects on her reasons for wanting to become an educator, she goes back to sixth grade, when Mr. Cisneros urged his students to envision their future.

...I’m happy that I’m here. It feels right to me.... All these extra initiatives we’re doing for our kids the vision of cultivating the whole child -- I love that vision, I stand for that vision. To me, it makes more sense to be here. Even the kids who are here reflect who I am, and I want the best for them.”