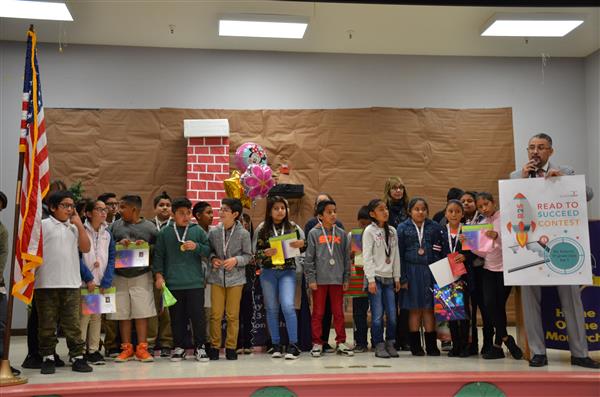 Roberth’s Monarchs won the Read to Succeed contest run by Achieve 3000, thereby earning a gift card. Naturally, the students wanted some fun as a reward.

“When we learned we had won - naturally the class wanted a pizza party - so I proposed they could do that, or they could donate the money to UNICEF,” Ms. Roberts said in an email. “I shared photos of children who are malnourished and immediately most of the class wanted to donate the money. A few shared that it was a hard decision to make.  I acknowledged that their feelings were valid and it made sense, because they had worked so hard to win the contest. I suggested we should wait a day, sleep on it, and vote the next day. They voted unanimously to donate the money.”

Ms. Roberts’ class donated the money on Tuesday's Day of Giving, a day that’s been designated as a day of charity giving right after a weekend full of shopping. On that day, all donations to the United Nations International Children's Emergency Fund, UNICEF, was being tripled.

“I matched my students' donation of $30,” Ms. Roberts said. “All-in-all, it was a donation that equaled $180. UNICEF equates monetary donations to the number of lives saved, but also in supplies - like blankets - to children in need.”

Stuart Udell, Chief Executive Officer of Achieve 3000, learned of Ms. Roberts’ story and sent her a very thoughtful email. When she read the email with her students they were very moved.

“It was initially met with wide-eyed stunned expressions and a slow-clapping of hands, which transformed into smiling faces looking at one-another with thunderous clapping,” she wrote. “I too was a bit stunned, and then moved to tears experiencing my students’ reaction. He too was moved by my students' thoughtfulness and issued another reward of $25 to recognize the students' generosity and compassion.”

Ms. Roberts says she chose UNICEF because  89 percent of donations go directly to children in need. Also, in the spring, her class will participate in UNICEF's Power-Up program (wearing fit-bit bands that gain points the more they’re active - the points equate to Therapy Food packs distributed by UNICEF). “This will be my fourth year that I will participate as a Power-Up teacher and we’re excited to help UNICEF even more!”  Ms Roberts added.

Congratulations, Ms. Roberts, for modeling compassion and generosity to your students, and for being rewarded with such a great class!